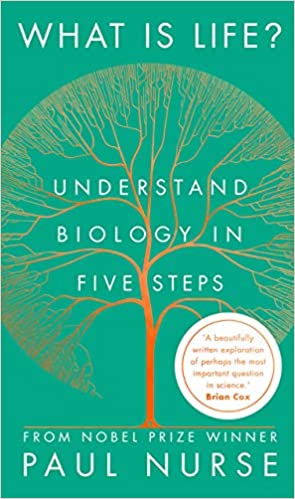 What Is Life?
Paul Nurse

A wonderful introduction to biology written by one of the most qualified biologists around today. Brief, beautiful and optimistic.

'Cells are not only the basic structural unit of all living organisms, they are also the basic functional unit of life.'

Cells vary enormously in size. A parasite can be a single cell, but then again so can an egg yolk or a nerve that runs the length of your body.

Microbes (single-celled organisms) are the most numerous form of life on earth. They're forms of life because all cells are, themselves, alive.

'Compared to a whole organism, like an animal or a plant, a cell may seem simple, but it is definitely alive.'

All cells come from other cells, through cell division. It is, after all, how we each started: through the division of cells from the embryo onwards.

'Cells are the basic unit of life. They are individual living entities, surrounded by membranes made from fat-like lipids. But, just as atoms contain electrons and protons, cells contain smaller components too.'

Within cells there are organelles. Two major organelles are:

'Apart from a few specialized exceptions like red blood cells which, as they mature, lose their entire nucleus and therefore all their genes - every cell in your body contains a copy of your entire complement of genes.'

The father of gene theory is Gregor Mendel who made observations of his many thousands of pea plants at his monastery.

Many years later, 'Mendelianism' emerged. Broadly, a theory of 'pairs from parents'. Followed by this was the observation of 'threads' splitting within cells right before they divided in two.

The next challenge was knowing what those threads were and how they actually work. The key material to understanding this turned out to be something that was misunderstood at the time: deoxyribonucleic acid.

'If you could somehow join together and then stretch out all the DNA coiled up inside your body's several trillion cells into a single, slender thread, it'd be about 20 billion kilometres long.'

Crick and Watson discovered the double helix in 1953, along with their description of nucleotide bases:

When a DNA strand splits in two, you will be left with the 'GATTACA' string of base halves on one side. Because each comes as a pair, you know what the other strand will be by default. This is basically digital information.

'Simple experiments and thinking can be surprisingly illuminating in science, especially when combined with a good measure of hard graft, hopefulness, and, of course, the occasional lucky break.'

Certain 3 letter sections on each strand correspond to certain amino acids that can then combine to make proteins.

'Splicing' allowed us to use bacteria to make insulin, a protein made inside E Coli... with one of our genes put in it.

The first human genome sequenced cost billions, took years and many thousands of people. Now, it can be done for hundreds in a few hours with just a couple of people working on it.

Evolution: selection of traits by the accumulation of successful variations that confer an advantage over others in the environment.

'The idea of natural selection is based on the fact that populations of living organisms exhibit variations, and when these variants are caused by genetic changes, they will be inherited from generation to generation.'

'Over the long term, the most successful species will be those that can maintain the right balance between constancy and change'

'This, to me, is one of the best arguments for why humanity should care about the entire biosphere; all the different life forms that share our planet are our relatives.'

The realisation that life is chemistry came from the yeast found in brewing.

First, a French scientist, Lavoisier, discovered fermentation. He found that the sugar in grapes was being turned into ethanol.

Later another French scientist, Pasteur, discovered yeast itself when he was brought in to find out what was going wrong at a French industrial alcohol maker. Some of their vats had yeast at the bottom, others did not.

After this Berthelot, another French scientist, discovered invertase by pulverising yeast. Invertase is an enzyme, a catalyst to chemical reactions involved with sugar.

Metabolism: the chemical reactions going on inside cells. This is concerned with maintenance, growth, organisation and reproduction.

Enzymes are made of proteins, proteins are made of polymers, polymers are made up largely of carbon atoms because of their four available bonds. (Two of those four bonds usually link to other carbon atoms, creating great long chains.)

'We now know that within the cells of all living organisms many hundreds, even thousands, of chemical reactions are being carried out simultaneously. These reactions build up the molecules of life, which form the components and structures of cells. They also break molecules down, to recycle cellular components and release energy. Together, the vast array of chemical reactions occurring in living organisms is called metabolism.'

Life is made up of only about 20 amino acids. Different combinations of amino acids make protein polymers that fold in certain ways into precise structures.

We are all made of, and from, proteins.

'Feel the pulse beating in your wrist, the heat of your skin, and the rise and fall of your chest as you breathe: it's all fuelled by ATP. Life is powered by ATP.'

We need Oxygen to release the energy from sugar, fats and proteins. This is respiration and it takes place at the cellular level.

'Ultimately, life emerges from the relatively simple and well-understood rules of chemical attraction and repulsion, and the making and breaking of molecular bonds.'

'Purposeful behaviour is one of life's defining features, but it is only possible if living systems operate as a whole.'

DNA is a linear sequence of information stored digitally. They are sequences of one of four possible nucleotide bases.

Every cell in the human body contains the entire set of DNA, so how does each cell know what sort of cell it is, and what to do? The answer is gene regulation.

Gene regulation is where certain sections of DNA are turned on or off depending on need. You only want kidney cells in the kidneys, skin cells in the skin... and so on. Only about 20% of our genes are turned on at any given moment in time. The rest are for 'occasional' specific uses.

'There are proteins that function as so-called 'repressors' that turn genes off, or 'activators' that turn genes on. They do this by seeking out and binding to specific DNA sequences in the vicinity of the gene being regulated, which then makes it either more or less likely that a messenger RNA is produced and sent to a ribosome to make a protein.'

A better understanding of gene regulation would significantly help with medical and therapeutic applications. We would be better able to understand and manipulate the mechanics of how we function at a genetic level.

'Accurate genetic predictors of ill health pose particular difficulties for medical systems that are funded by personal health insurance. Without strict controls on how gene information can be used, individuals could find themselves being deemed uninsurable and denied care, or charged unaffordably high insurance premiums through no fault of their own.'

An open question, currently, is how cells organise themselves into organs... and know when to stop? That is, the cells know to turn into kidney cells, but how do they all know when the kidney is 'done'?

Currently we don't know for certain, but it could be that there are gradient markers that determine how far away the cells have developed from some theoretical centre of mass for the organ. When it runs out, they stop. But this is just a hypothesis right now.

A recent development in genetics is CRISPR which allows for the 'editing' of certain gene sequences. This raises some ethical questions about how we use this tool, but it's not like we haven't been, at the very least, 'selecting for traits' for quite some time:

'Beginning around 10,000 BCE, the world's population leaped upwards when our ancestors started farming. They didn't see it this way at the time, but this was achieved by our human ancestors applying the principles of artificial selection to domesticate animals and plants. A much larger and more reliable supply of food was the reward.'

Currently, we could use GM to make incredible changes to our food supply. A good example is 'golden rice'. In countries with high food poverty, many children go blind because of Vitamin A deficiency, and many more simply perish.

Golden Rice is a GM version of rice that contains more beta-carotene/Vitamin A and would greatly reduce the incidences of Vit A deficiency, and therefore blindness, in children in these countries. Because it's rice, it's much easier to cultivate and distribute than, say, carrots or sweet potatoes.

Twenty years later, golden rice is blocked and delayed by international regulation largely driven by ignorance of how genetics work.

'I have seen debates about the safety of GM foods constantly derailed by misunderstanding, misplaced lobbying and the injection of misleading information.'

Nurse sees other opportunities missed, too.

It's much easier to say what life does, rather than what it is.

'The answer I got at school was something like the MRS GREN list, which states that living organisms exhibit Movement, Respiration, Sensitivity, Growth, Reproduction, Excretion and Nutrition.'

There is also a deep interdependence between all forms of life here on earth. We are not islands, not one of us.

'There is not a single known species of animal, plant or fungus that can generate its own cellular chemistry entirely from scratch.'

All life is genetically related through our shared evolutionary roots; most biological operations are incredibly similar.

'These deep commonalities in life's chemical foundations point to a remarkable conclusion: life as it is on Earth today started just once.'

'Biology shows us that all the living organisms we know of are related and closely interacting. We are bound by a deep connectedness to all other life.'