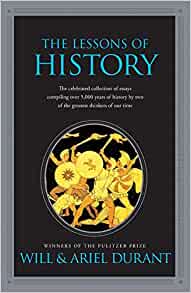 The Lessons of History

Extraordinarily enlightening for such a compact volume. A broad survey of history through the lenses of government, war, religion, economics and more. Astonishing for its breadth and depth as it is its brevity.

History Can Feel Irrelevant... But That Couldn't Be Farther From the Truth

History can be difficult. How much does it really teach us about us and the world we live in that we cannot already tell by simply examining the world around us, as it is?

History is never complete and always changing. It is subject to our own bias and prejudice and views and all manner of other human foibles.

And yet, considered carefully (as the Durant's consider it), it can teach us an enormous amount about ourselves.

Humans are Shaped by Lands and Climates

The planet earth made us and the planet earth can break us, too. While it still wields this power over us, only we as humans can create civilisation. It follows, too, that only we have the power to destroy that same thing.

The course of the human race has been shaped by the geographies and the climates of the lands we inhabit. We lead different lives in the forests or the tundra, in the desert or by the river, on the mountain or next to the sea.

The effects of these wax and wane over time, but they are important.

The rise of technology will perhaps shift this again (it), the influence of geography diminishing as technology develops over time.

Life is Competition, Selection and Replication

Competition is the life of trade, but also the trade of life: 'peaceful when food abounds, violent when the mouths outrun the food.'

Inequality of individuals is both a factor of the individual and the complexity of modern civilisation. The more complex the civilisation becomes, the more inequality there inevitably is; the landscape becoming that much harder to navigate, it favours those who can navigate well.

The best we can hope for is a tension and compromise between the two.

Quantity is a prerequisite of quality. There needs to be checks and balances on what is let through, but you cannot do this with a thin amount to choose from.

History has three main balances for the human race: famine, pestilence and war. Eventually, in time, one or all of the three are coming for us. Can we progress past the fear of this happening?

'Race' Has Almost Nothing to do With Anything...

...in the sense that there is no people inherently superior or inferior to the other. As we saw earlier, the two biggest factors that determine outcomes for a civilisation are their geography and climate. Not the colour of their skin.

National and cultural identities take time, often many hundreds of years, to emerge from great cultural gatherings. 'The English' were formed of Romans, Celts, Angles, Saxons, Jutes, Danes and Normans over 6-700 years, give or take. Their races have nothing to do with it.

Evolution, in human memory, has only ever been social - not biological.

The majority of the imitative follow the minority of the originative, the minor few that form and emerge ideas that, over time, pass through the filters of society that test and grapple with them.

'No one man, however brilliant or well-informed, can come in one lifetime to such fullness of understanding as to safely judge and dismiss the customs or institutions of his society, for these are the wisdom of generations after centuries of experiment in the laboratory of history.'

Ideas must always be challenged, no matter how smart the originator might seem.

Morals Are Less Variable Than We Think

A small amount of knowledge of human morality through the ages suggest they change all the time. A deeper knowledge tells us that they remain fairly universal.

Of course, all ages - from our own through every other conceivable age of the human race - has their 'moral decay' and examples of outrageous behaviour. But this is always against the backdrop of honest, hard-working families going through life raising children and attending church.

Order and discipline to some sort of moral code is useful, but it in times of significant change and upheaval it is not always possible to know what that code is or how it should be followed.

Religion: Less About God, More About Who We Are

It was fear that first made the Gods. Religion, once fear had created the Gods that were necessary, then helped to establish moral codes and guidelines that the people could then adhere to.

Adherence to these moral codes was and is incredibly useful because it keeps people on even keel and has historically helped to moderate the worst of the more questionable ethics and urges of us mere mortals. Religion also played a significant part in formalising charity and establishing rule by law, rather than just allowing nobles and lords to decide what's best.

But it, of course, not all good news.

Somewhere along the way, and from time to time, religion becomes more interested in promoting orthodoxy and engaging in wars (military and otherwise) to establish financial hegemony. Religions have been embroiled in corruption, scandal and have disgraced themselves on many, many occasions.

Human civilisation has long depended on religions to help guide and control our decisions, but the industrial revolution marked our first genuine wholesale departure. This move away from religion continues apace today.

If our ethics and moral codes don't come from the god in the mountains or from a throne in heaven, where do they come from? Mortal, fallible men? Who are they to say what we should do? It becomes harder to maintain the previously crystal clear moral clarity.

Buddhism is a good example of this in action - a religion created by man without a God, but whose followers eventually installed Gods, saints and other mythology which was not there to begin with.

Wealth Is Good, But Unchecked Inequality Harms Us All

'All economic history is the slow heartbeat of the social organism, a vast systole and diastole of concentrating wealth and compulsive recirculation.'

This accrual of abilities and wealth is what sets nations apart but divides nations internally. Greater inequality, if left unchecked, can eventually destroy a nation from within. There are only two ways that inequality resolves itself: legislation to redistribute wealth or revolution to redistribute poverty.

This is an unusual point, but a convincing one. As if they were two sides of the same coin or the yin and yang of life, there is and has always been a constant tension between capitalism and communism throughout history.

States have, at various times, taken control of production and industry instead of leaving things in private hands. This has some benefits in a way, but only grows more difficult. Ancient Egypt, China, Rome and Peru have all, at various times, controlled production - it is not just the soviet states of the 20th and 21st century.

None of these communist states have ever functioned well for long, but then again neither has completely unfettered capitalism. Unchecked, capitalism has the potential to deprive, poison and corrupt. Unchecked communism is just as bad.

In reality, each need the other and we will forever swing between the two or be held in a tension halfway. To argue that full-throated capitalism or communism is 'right' is completely wrong.

The Need for Government - The First Condition of Freedom is Limitation

Make freedom unlimited and we subject ourselves to chaotic anarchy. Make limitation too strong and we inhibit ourselves from ever succeeding.

Our governments must navigate and judge this balance appropriately. They must establish order to allow nations to function and prosper, but they must be careful not to go too far.

Monarchy has historically been the most prevalent form of government but has been edged out in recent centuries by democracy.

Revolution is a uniquely poor way of affecting the course of politics; it destroys wealth, kills people and sets us back. Better to have long and boring transitions that address the imbalances of our societies rather than the revolutionary change that leaves a trail of destruction in its wake.

Democracy cannot be left unchecked either, in the sense that it must not be allowed to cede control to the political/ruling classes for fear of disenfranchising the plebiscite with terrible consequences as it did in ancient Greece:

'The middle classes, as well as the rich, began to distrust democracy as empowered envy, and the poor distrusted it as a sham equality of votes nullified by a gaping inequality of wealth.'

Democracy is, in the end, the least worst of all forms of government.

Peace is An Unstable Equilibrium

Peace is only ever maintained by supremacy or equal power. Over time, this makes war inevitable. Periods of peace are relatively rare and uncommon.

Even great displays of cooperation and goodwill are undermined by acts of subversion and subterfuge, underneath. The mutual threat is what really maintains the peace, however.

Perhaps we will only ever know peace on this planet when we meet an alien race, giving us an external threat that we can rally together to defeat.

Societies Grow, But They Always Fall

Growth of a civilisation is not a function of the social contract between ruler and ruled. Far from it. Instead growth is harnessed through the challenges and conflicts that face us, and the response of the collected creativity and intelligence of the citizenry.

'If we ask what makes a creative individual, we are thrown back from history to psychology and biology - to the influence of environment and the gamble and secret of the chromosomes.' [I would argue this, but this is not the time nor the place.]

Nations may die but civilisations never do. Their memory, influence, art, philosophy and learning spread outwards and live on.

'This selective survival of creative minds is the most real and beneficient of immortalities.'

Is Progress Real? Yes, But Not in the Way You Might Expect

Progress is not happiness. This would fail us immediately - we always can find ways to be unhappy, no matter how materially comfortable we are or wealthy.

'We double, triple, centuple our speed, but we shatter our nerves in the process, and are the same trousered apes at two thousand miles an hour as when we had legs.'

Progress can generally be understood by the level of influence that life has over its environment; whether or not we can rise above the problems caused by too little rainfall, or too much, or the cold, or the heat. This is a similar principle embodied by the [Kardashev Scale.]

The other and final way that we might understand progress is that, although we are not 'born better' than our ancestors, we are born into a world that has a much richer cultural heritage. Today, we stand upon the shoulders of those that went before us. We benefit from the accumulated wisdom of science, education, philosophy, art and medicine.

It is our privilege to gather as much of this as we can, learn it for ourselves, and pass it on to future generations.

If you found that interesting, why not sign up to my mailing list? You'll join several hundred others receiving interesting updates about curious things that you won't see here on my blog. The emails are infrequent, it's easy to unsubscribe and I don't have anything to sell you. Neat.
Nice one! Please check your inbox for the very important next step...
Oops! Something went wrong while submitting the form.