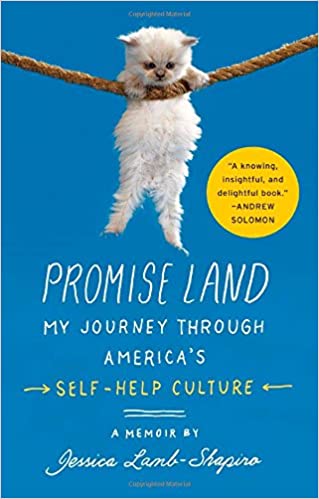 A critical, insightful and, at many time, very funny look into the less-than-innocuous world of self help. The memoir element of the book—related to Lamb-Shapiro's relationship with her father and the mother she never really knew—was touching, but I wish she had spent more time broadening out to discuss self-help in a wider societal context. Absolutely worth reading if you've ever wondered why you've got so many self-help books on your shelves.

'...the hopeful self-help magnate is a paradoxical breed, at once believing himself to be invested in society's greater good while also desiring to secure a personal shitload of cash.' (Page 10)

The 'Inspirational Story' (IS) is the bread and butter of all self help. They are very quickly able to create an emotional response in the person listening, watching or reading. Most Self Help (SH) material begins with the protagonist/author at some kind of low point, and the IS charts their rise to success. They can then follow this up with their method, system or set of rules, habits, etc. etc.

The first use of 'Self Help' as a term was in the book of same name by Samuel Smiles (yes, his real name) in 1859. Since its creation in those early days, the term and the industry that has grown around it carries with it a paradox: it wants to inspire you to greatness, but also you are dependant on the person doing the inspiring who also happens to want to make a shitload of money selling things to you.

'Self-Help was published in the same year as The Origin of Species; Smiles outsold Darwin. The only book Self-Help didn't outsell that year was the Bible.' (Page 20)

The Importance of Formulas

But, the business model relies on it. It relies on this assumption, and that you will become dependent on using these products in your life.

'"You're not selling books; you're selling a vision for what their life could be like once they buy your information, your program, your system."' (Page 34)

The most reliable formula, though, is teaching others how they can do the same thing. To buy books, or attend training seminars or workshops about how to become trainers themselves.

This is the third mainstay of self help. Phineas P Quimby was the progenitor of the New Thought Movement, which is essentially a faith or religion of the self. It was worse than that, though, because Quimby claimed he could cure diseases purely through conversations because it was all in the mind and what you were thinking. Think bad thoughts? Get sick. Think better? Be cured.

'Quimby laid the foundation for the belief that mental power could conquer disease, habit, and any obstacle life could conjure. His theories soon enthralled the cultural imagination.' (Page 75)

1894 was the first New Thought Conference, 1908 was the founding of the 'New Thought Alliance'. (This 'Alliance' still exists today, and has this to say for itself on its website's 'what is new thought?' page: 'New Thought is actually is a broad term which covers numerous ideologies, all of which are subsumed under an even broader term - metaphysics.')

In 1922 a Frenchman, Emile Coué, coined the term 'autosuggestion' and essentially invents affirmations. He is another among the ranks of belief that optimistic statements and 'self mastery' can cure physical diseases.

The publishing of truly blockbusting self help really started in America shortly before World War Two, in the thirties, with the publication of 'Think and Grow Rich' by Napoleon Hill and the eponymous 'How to Win Friends and Influence People' by Dale Carnegie, both in 1937.

'Published at the tail end of the Great Depression, this type of book was especially attractive to people, historians argue, because it encouraged them to believe success could be achieved through the one thing they had not lost: themselves.' (Page 27)

'In only a few months, Simon & Schuster published fourteen editions of How to Win Friends and Influence People. It was the number one best seller in 1937, with 729,000 copies sold. By 1956, the book had sold five million copies in hardcover and paperback. It's still in print today.' (Page 26)

'The Power of Positive Thinking' by Norman Vincent Peale came out in the early fifties, and completes the 'holy trinity' of 20th century self-help classics.

'When The Power of Positive Thinking came out in 1952 it stayed on the best-seller list for one hundred and eighty-six consecutive weeks. In The Power of Positive Thinking Peale urges the reader to "become a possibilitarian." Regardless of how hopeless and dark things may seem, you should always keep a positive attitude. You should always imagine yourself succeeding.' (Page 77)

The Law of Attraction and the Co-Opting of Science

There is a large amount of co-opting of the spiritual and the scientific. A good example is 'fire walking', a phenomenon that is made possible by the poor conductivity of wood ash and the timing of the event at night making the glow of the coals seem more intense than they really are. They are asked to believe in something, when really it has nothing to do with the power of their belief and everything to do with basic materials science.

The law of attraction argues that what you think you receive. That the universe and the quantum field and your vibrations and 'frequencies' all change the material results you get in the world. Again, this is more co-opting of scientific vocabulary that means very little.

Shapiro makes the very good point that if you're caught up in a genocide, were you and all the others all just thinking 'genocidal thoughts' or something?

'The law of attraction is unidirectional; it doesn't fail you, you fail it.' (Page 125)

It's All On You, The Individual

The law of attraction, positive thinking, and every other flavour of self help all do a similar thing: ask the individual to assume total responsibility for everything that happens in their lives. This also argues that there's essentially no impact from external sources, which is an inherently very conservative outlook on life and highly individualistic. It runs contrary to previously widely-held beliefs about society, community, family etc.

'Stone reiterated what is essentially the politically conservative heart of self-help. He urged the reader to stop blaming society and to take personal responsibility for their failures; the onus is on the individual, not the government or any other institution.' (Page 119)

What's especially bad about assigning all responsibility to the individual is that wider society is absolved of all culpability.

'The use of self-help books is a form of bibliotherapy, the idea that a stack of pages between two stiff boards can serve as a therapeutic aid.' (Page 4)

'I met a thirteen-year-old boy who was writing a self-help book on surviving adolescence.' (Page 13)

'the inspirational story was a psychological machine of fantasy that turns tragedy into triumph, and makes meaning out of the meaningless.' (Page 23)

'This is the great paradox of self-help; at the same time as people are feeling inspired, as new life is breathed into them, they are also becoming dependent on the person or book or program that is providing the air. Once you are hooked up to the oxygen machine, you have to drag it with you wherever you go.' (Page 24)

'Perhaps my favorite explanation of what a makes an expert comes from Mark Twain: "an ordinary fellow al from another town."' (Page 90)