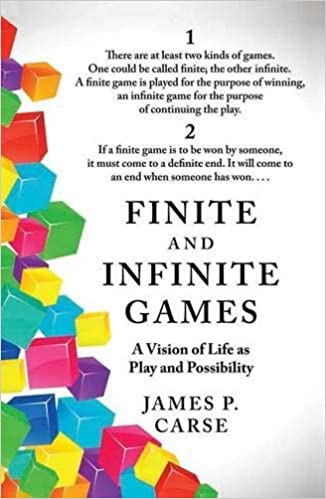 A philosophical out-of-body experience that will subvert the way you understand the world. A short book, but not one that you will want to try and read quickly - it is remarkably dense and highly abstract, so go slow. Brilliant at the beginning and in the middle, but tapers off into obscurity and convolution towards the end.

Finite games are winnable, infinite games are played continuously. The finite game cannot continue once the game has been won, even if others will it; once play has ended in the minds of the players, there is nothing that can be done to restart play.

'Whoever must play cannot play.'

There are temporal and geographical constraints placed on finite games. They must have a start and an end, a place where they are and everywhere else where they are not.

Rules must be decided before play can commence and agreed by the players.

Agreeing to the rules makes you a player in the finite game that you have chosen.

Rules determine the winner of the game and thus dictate the end of the game, too.

Rules tell us what the game is and how it is to be played.

Infinite Games Have Rules That Change

We May Step On & Off the Field of Play

Finite games have fields that we may choose to play on. We do this by veil ourselves in the role that we are to play: the mother, the father, the entrepreneur, the musician, the athlete, the writer, the guru.

We sometimes veil ourselves so much that we do not realise that they are roles - optional ones - that we can choose to adopt or abandon at any time.

'At which point do we confront the fact that we live one life and perform another, or others, attempting to make our momentary forgetting true and lasting forgetting?'

Infinite players are, it turns out, cognizant of the roles that they play. It gives them perspective. They go along with it.

Serious things have an outcome that must be met and is pre-ordained, to some extent.

'They [infinite players] regard each participant in finite play as that person playing and not as a role played by someone.'

Playfulness has no outcome and revels in it.

Infinite games are dramatical (or meta). That is, one has a choice to 'become a writer', for example. However, finite games are theatrical (or not meta); you simply 'become the writer.

One knows they put the veil on. The other knows only the veil, but not that it's there. One is knowing that a game is being played, the other is the suspension of disbelief.

This poses an interesting question: can we ever be fully aware of all the veils that we wear

There is also the consideration that the adoption or removal of certain theatrical modes or veils is not without consequence. There are finite/veiled games that we play because we must to meet some requirement of society. Yes, we may choose to stop playing but this is not without ramification.

Some Play the Game Better Than Others

'Master players' are able to play games as if they have already happened because they have a greater knowledge of how they typically tend to play out. Or at least they pretend to.

'A true Master Player plays as though the game is already in the past, according to a script whose every detail is known prior to the play itself.'

Can one choose to wear the veil of a master player? Is 'being a master player' a finite game? It must be, because you can succeed at it. Does playing the game well as a master player therefore unlock success in potentially any game that the player may then choose to play? This, perhaps, is the key.

Or is it just a clever way of saying 'fake it 'til you make it'?!

You Have Titles (& They Tell A Story)

'Founder', 'CEO', 'Dalai Lama', 'Convict', 'Murderer', 'Knight of the Realm', 'Con Artist', 'Teacher', 'Therapist'. All of these are titles. They are of varying kinds, but they are titles all the same.

Titles indicate the games you have played in the past and, perhaps, are currently playing. If you are a therapist you have played the game of becoming qualified as therapist, but you also continue to wear the title because it is what you do in your career.

Once you have a title it is difficult for it to be taken away from you, but there are instances where this can happen, at least by the adaptation of rules.

Possession of a title shows that that particular game is over and cannot be repeated. The title must necessarily point back to the game that has been played, and therefore must be visible. If it is not visible to people, it may as well not exist and it ceases to have power.

'Infinite players play best when they become least necessary to the continuation of play. It is for this reason they play as mortals. The joyfulness of infinite play, its laughter, lies in learning to start something we cannot finish.'

'A powerful person is one who brings the past to an outcome, settling all its unresolved issues. A strong person is one who carries the past into the future, showing that none of its issues is capable of resolution. Power is concerned with what has already happened; strength with what has yet to happen. Power is finite in amount. Strength cannot be measured, because it is an opening and not a closing act. Power refers to the freedom persons have within limits, strength to the freedom persons have with limits.'

No One Can Play a Game Alone

We exist, always, in context. This is not something that can be altered or changed - context is always present and individual games are not possible.

This is the case for others, too. They must exist in a context and may not play on their own, either.

'No one can play a game alone. One cannot be human by oneself. There is no selfhood where there is no community. We do not relate to others as the persons we are; we are who we are in relating to others.'

The context that we inhabit is ever-changing. Only that which can change can continue. Change is the basis of our continuity as humans.

Infinite players understand society is the collection of our boundaries grouped together by their constraints. Culture, though, is made of the choices we make, undirected, with no claim made by authority to constrain it as such.

'Society they understand as the sum of those relations that are under some form of public constraint, culture as whatever we do with each other by undirected choice.'

Society is a series of games played within growing levels of hierarchy. The power of various citizens in society is determined by the games that they have played and won. Losers have no monuments erected for them.

Society is a Finite Game. Culture is an Infinite Game.

Culture has no boundaries, whether temporal or geographical. You can engage in ancient Egyptian culture from the North Pole if you really want to.

Creativity is cultural deviancy - you take the past and mould it anew, forming it in a new light, infinitely moving forward. Society aims to hold the past in stasis, to confirm what society is and prove it is unchanging.

'There are variations in the quality of deviation; not all divergence from the past is culturally significant. Any attempt to vary from the past in such a way as to cut the past off, causing it to be forgotten, has little cultural importance. Greater significance attaches to those variations that bring the tradition into view in a new way, allowing the familiar to be seen as unfamiliar, as requiring a new appraisal of all that we have been-and therefore of all that we are.'

'Deviancy, however, is the very essence of culture. Whoever merely follows the script, merely repeating the past, is culturally impoverished.'

A thriving culture is infinite creativity.

We hold property to prove our success in the past. It is emblematic, proving to others that we have earned the worth of what we possess. It is visible, has a position in space and time and bars others from passing through or within.

'Property is an attempt to recover the past. It returns one to precompetitive status. One is compensated for the amount of time spent (and thus lost) in competition.'

Consumption is required to prove of others that we may have considerable property. The more property we have, the longer the period of consumption may last.

Given all of the above, wealth is not possessed but performed. It is active.

Society In Conflict With Culture

There is conflict between society and culture. Society has boundaries and aims to stand still, where culture carries on forever and changes as it progresses without boundaries. Culture has no horizon.

Creativity does not result in works of art or products or poems or anything tangible or intangible but the ongoing engendering of creativity in others who continue on the infinite culture.

As such, art can never be possessed because you cannot possess a thing that happens in the mind of another. Art is not property, but possibility.

'One does not become an artist by acquiring certain skills or techniques, though one can use any number of skills and techniques in artistic activity. The creative is found in anyone who is prepared for surprise. Such a person cannot go to school to be an artist, but can only go to school as an artist.'

Patriotism is the effort to increase and strengthen the boundaries of society. It does this by seeking to increase the power of that society.

'Because patriotism is the desire to contain all other finite games within itself-that is, to embrace all horizons within a single boundary-it is inherently evil.'

To increase the power of a society, it must overpower enemies to gain titles and win finite games. If there are no enemies readily available, they must be created - inside or out.

War - with an enemy within or without - is more about self-identification and self-protection.

You Are The Genius of Yourself

To speak or act originally is to erase the boundaries of yourself. Original thinkers are not 'full of thoughts' but the thinkers of thoughts.

As genius, we do not look but instead we see. Nature has no outline - only our imaginations do. I may see a person to be photographed, you may see your husband, they may see a groom.

Because we are 'reasonable creatures', we can choose to see almost anything we want in whatever we want. Herein lies a significant danger, because we may also convince others.

Looking finds the outlines as they are. Seeing creates new boundaries.

This process can never stop. With each new game that begins, we must believe anew that we are losers. This is true in sport, in war, in finance.

The infinite players breaks the spell by allowing the past to stay there, in the past, without returning to the same finite loop again and again.

Options Dwindle In Time (But Not for Infinite Players)

Your options dwindle in time and we are not able to earn the titles we might have in our youth. Opportunities, at one time numerous and varied, dwindled the longer time wears on.

However. Infinite players create time, generate in. They don't fill time with work. They fill work with time.

If you found that interesting, why not sign up to my mailing list? You'll join several hundred others receiving interesting updates about curious things that you won't see here on my blog. The emails are infrequent, it's easy to unsubscribe and I don't have anything to sell you. Neat.
Nice one! Please check your inbox for the very important next step...
Oops! Something went wrong while submitting the form.