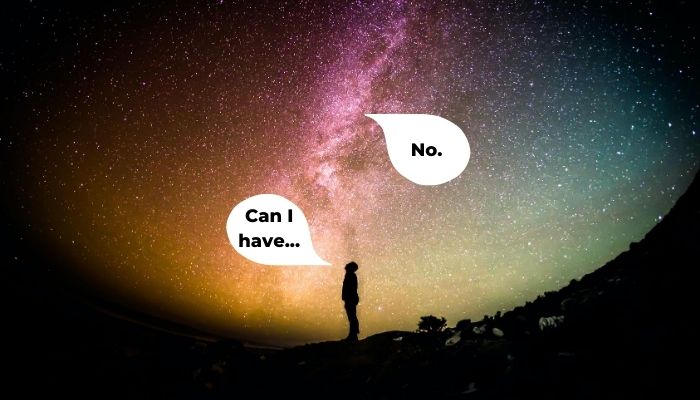 Photo by Greg Rakozy on Unsplash.

Sorry to break it to you. Here's an explanation of what's really going on, and why 'manifesting' is such a misleading concept.

Ask And You May Or May Not Receive

Manifesting (v): to bring something into the world - via 'the universe' - by imagining that it already exists.

Have you ever read (or - the horror - watched) 'The Secret'? It’s the book/film combo responsible for making the concept of manifesting - thinking riches and success into existence - so widespread and popular. Sixteen years after the film appeared, the idea has become blandly pedestrian. 'Oh yeah,' you'll hear over your latest zoom brunch, 'I've been working really hard on manifesting [insert material gain] and now it's paying off. So blessed.' (It has also recently been made into another movie - this time a dramatisation.)

In its popular format, manifesting is a concept of such empty pseudoscience that it should be actively avoided by everyone currently alive on planet earth. Where this new-age idea drifts by more or less harmlessly in the good times (broadly defined as whenever we are not in another 'once-in-a-generation' economic crisis or highly infectious respiratory pandemic), it surges in popularity when things get tough.

Thanks to Covid19 many have been financially, physically and emotionally pummelled over the last few months. The great pandemic lottery of 'whose careers survive or not' has surprised few with who has so far won and lost. Conversely, others have been able to continue on as normal and some, the smallest and most fortunate group, have thrived and profited.

Within the more fortunate groups, some are more prone than others to explain their good fortune because of the mindset they have adopted. This is a response I believe stems from the popularity of the manifestation philosophy. Those that are down on their luck may see this and turn, inevitably, to the ever-flowing font of mindset motivation and self-help wisdom that exists online and in print. Never mind that not all jobs can be done from home - don't be so negative - you must manifest your way out of this particular pinch.

The (Mutable) Law of Attraction

Manifesting is just another name for ‘the law of attraction’, the belief that you can get what you want just by thinking about it.

There's a lot to unpack here. The biggest assumptions are that the universe has sentience, is aware of you, and is somehow interested in helping you get what you want, no matter how minor. In the 2004 film of 'The Secret’, one example is of some rube imagining himself driving a sports car that he really wants. He sits in his armchair, closes his eyes, then heads out for a drive in his mind. He works the pedals and grips a non-existent steering wheel in front of him, feeling the wind on his face as he changes gears.

(Typical examples used by the acolytes of manifestation are almost always material: cars, houses, bigger salaries, promotions etc. Curiously, nobody selling LOA has ever had the smart idea of organising collective action to imagine world peace or to reverse climate change. Or, if they have, it hasn't worked.)

Secondly, there's this whole idea about frequencies and vibrations. This is peak yogababbling drivel at its most inane. As far as I can tell, it’s got something to do with the bastardisation of Einstein’s E=mC^2 - it's the difference between ‘matter has equivalent energy’ and ‘everything is, like, energy, man!’

If there really is a frequency for 'I want a new car', I'd love to know what it is and exactly where it appears on the electromagnetic spectrum. Is it somewhere between infrared and visible light, or does it carry more energy than a gamma ray burst? If it's going to fatally irradiate my entire city I think I'll stick with my modest Volkswagen.

But this is all only surface level. It gets much worse.

What Do You Mean You Don't Want a Race Car?

The unethical problem at the core of manifestation is that it is the preserve of the privileged, completely disregarding any potential influence from the outside world. If you are a relatively wealthy individual with agency over your actions you can manifest your new car easily enough by, perhaps, spending less on other luxuries and shopping around for a dealership that will give you a good financing arrangement.

The logic of the gospel of manifestation is that it shouldn't matter if you live in a country, a society, a system, a city, a family or a relationship where you are held back by the context you inhabit because if you're not getting the results you want, well... it's because you're just not imagining it hard enough.

Consider this: if you would not be comfortable sitting down with someone living in or fleeing from a war, or a cartel, or abuse, and telling them with a clear conscience that the only thing holding them back is their mindset and that they need to adopt 'an attitude of gratitude', then the rationale of the entire enterprise is sunk.

Is it one rule for you and another for them? Do you only enter the manifesting club when your socioeconomic status is good enough? Are you just doing it better than they are? Does the universe care about you, but not give two shits about them? Are you sure it's got nothing to do with the fact that you live in a rich country, have the time to read indulgent books about the law of attraction and enjoy ignoring your own privileges and rights granted to you by dint of the circumstances you find yourself in?

It might come as no surprise that the majority of the people saying anything about manifesting are usually selling something about it, too; many derive their wealth from motivational speaking and training. The core narrative that these self-help gurus spin is that it is the individual alone - yes, you! - who has the power to change their life for the better. It's the kind of thing that fits in well with the American dream - the self-made, you-can-do-it-too, go-getter narrative.

In a deliciously ugly twist of irony, they then turn around and tell you that, actually, you can’t do it on your own. You need their help to make those dreams happen and they just so happen to have a course or a book or a seminar that will make the whole process that much easier. Usually it's seven habits, or six simple steps, or a sixty seven step program. Naturally, the success that they evidence to their students - their own wealth and good fortune - is financed entirely by the people who have paid to learn this from them in the first place.

It is self-help as Ouroboros, the great snake that devours itself.

Before you charge me with being some kind of irredeemably negative fun-sponge, know this: I personally believe that having clear goals and visualising success absolutely can help us to get what we want. Where I differ though, is how, where and when these processes actually work. The where and the when are largely a factor of whether or not you already live in a wealthy country and aren't threatened by, oh I don't know, an imminent coup d'etat, famine, war, the disintegration of the rule of law or the appearance of masked men at your door in the middle of the night.

If you're lucky enough to have the means to engage in all that top-of-Maslow's-Pyramid type stuff, then you're good to go.

In terms of the how, though, this is just regular, run-of-the-mill human psychology. This is perhaps why manifesting and the law of attraction is so insidious - among the scientific truth, all of the other yogababble can creep in.

Here's a handful of effects that are actually at work:

Frequency illusion: if you have a long and involved conversation with someone about red cars, you will subsequently begin to notice more red cars. Similarly, if you're always thinking about new jobs to apply for, you are more likely to notice and recognise opportunities when you're browsing around.

Long term motivation: visualisation of a given goal or objective motivates us to take action and plan for a certain outcome. If you're obsessing over getting that dream job mentioned above, you're more likely to go and look for it and look in places where you are more likely to find it. (Citation.)

Skill building: some amount of visualisation helps to improve your skills, albeit only up to a point. If you think about being good at finding a job, you are more likely to adopt a slightly more effective approach for a while. (Citation.)

Confirmation bias: wherein we take actions and look for evidence to fit and confirm the beliefs we already have. Finally got that job? It can only have been because of manifesting! (Citation.)

Thank People, Not the Universe

By all means visualise as much as you want, set goals, take action and - with enough perseverance - you stand a better chance of hitting those goals than if you didn't do any visualizing. This makes perfect sense. But whatever you do, don't fall foul of the final harm that the law of attraction may commit against you: to make you believe that any and all failure is entirely your fault.

The truth is that there are so many other factors that can and will work against you: limited access to capital, racism, corruption, poor health, even how tall you are and any given success or failure may happen for all sorts of reasons outside of your direct control.

Just as a failure isn't necessarily all your fault, neither is every success necessarily all yours to claim. We so often take for granted the many shoulders we stand on, of those who went before us to give us what we have today. This is perhaps what is so distasteful about the philosophy of manifestation: it is a myopic, egocentric view of the world.

If you really want to adopt 'an attitude of gratitude', don't just thank the universe for the material things you have, thank also the people who have helped you, each and every step of the way, to get you to where you are today. 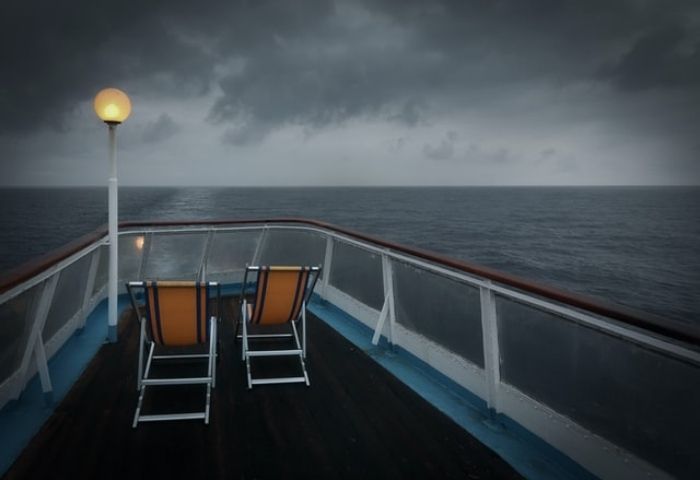 6
Min read
Dec 10, 2020
Optimising For Deck Chairs - Why We Fool Ourselves Into Solving the Wrong Problems

When we've got a problem, many of us like to swing into action and get to work on building a solution. Thing is, sometimes we end up solving the wrong problem. Here's how to slow down and get to the bottom of things without wasting your time.