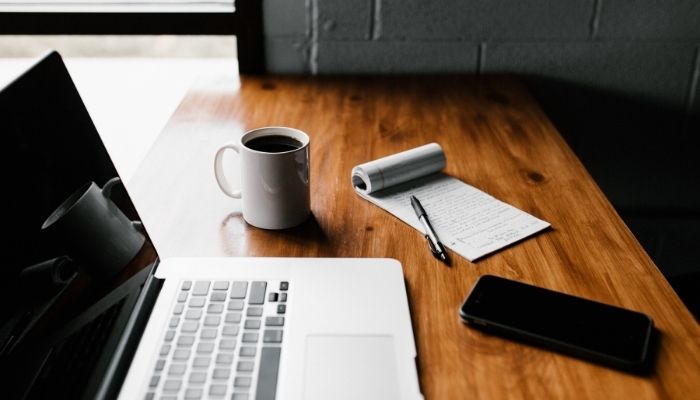 Photo by Andrew Neel on Unsplash.

My Utterly Bizarre Routine to Write 1000 Words Every Day

In which I discuss the *totally weird* life-changing benefits of consistently sitting down and doing the work, every day, until it is finished.
10
minute read
Writing

I've got a writing routine that is so revolutionary, it will blow your mind. I've refined and honed it for years, allowing me to produce at least 1000 words every single day. Here it is:

It's pretty incredible, I know. You may be wondering, 'how on earth did he come up with such an unusual technique for mastering the art of writing?' Or, 'isn't this remarkably similar to something Shia LaBeouf said one time?'

All jokes aside, a lot has had to happen to get me into a position where I can reliably sit down - each and every morning - and know that I will have knocked out a thousand words within an hour or so.

Some days, I end up writing twice that amount. But there are very few days (usually Sundays) where I don't write anything at all.

It's become such a habit that I actively hate not writing that much each day. It's something I need to do, like a daily shower or a morning coffee.

A lot of the advice that's already out there like 'make a routine', or 'use pomodoro timers', or 'start with 100 words and add 100 more every day' is next to useless. None of it means anything.

All of that advice is about 'how' to do the mechanical act, and that counts for little.

You just need to write - goddamnit! - every damn day. Write! If you don't want to write then you probably aren’t a writer. Stop reading this and go do whatever it was you were doing before (which wasn't writing, right?).

If you'd rather write for 'team breezy productive' instead of 'team difficult nothing', there's a bunch of changes you can make to significantly increase your output.

Writing without a point doesn't go very far. Because... what's the point?

What are you writing for? Are you writing to inform? To entertain? To question? To investigate? To explore? To think? To skewer? To uplift? To mourn? To exalt? To incite? To calm?

Who are you writing for? The elites? The masses? The hopefuls? The hopeless? The loved? The unloved? The insiders? The outsiders? The bored? The excited? The sceptics? The believers? The pessimists? The optimists?

If you don't know yet, that's fine. But ask yourself these two questions each time you sit down to write until the answers begin to emerge.

Want to get to the answer faster? Make sure you write. Every day. Your initial weeks of daily writing may be entirely for you, to figure out who and what you're writing for. It's much, much easier to do this while writing, though, rather than just sitting back and pondering.

Be as Lazy as Possible (But No More)

If you want to write 1000 words a day, being lazy is incredibly important. Being lazy obviously doesn't mean doing as little as possible, it just means making what you do as easy as possible.

The easiest change I've made is to have a bunch of different articles on the go at any one time. This works well because it means I seldom start articles, I more often continue them. It takes less energy to work on something that's already underway and it's much less daunting, too.

(I normally start things when I have the initial idea and a spurt of energy for the topic, capturing the fleeting energy while I still can.)

It also means I can work on whatever my whim fancies. Maybe I spent the last three days writing something far too serious and I feel like a change. Great! I just flip over to a more lighthearted article I already had an outline for, then pick up where I left off and start bashing out the paragraphs.

Make sure, too, that you get your writing done earlier in the day rather than later. Some of you may be night owls, sure, but the vast majority of people have more energy at the beginning of the day and less at the end.

If I write at the end of the day it’s a slow trudge. In the morning it flows out easily. This leaves me more time to be lazy, later in the day.

Write Your Ideas Down

If you have a great idea for an article or an essay or just about anything, you either write it down or forget it forever. Sorry.

There is not always a direct chronological connection between 'having the idea' and 'having everything you need to write the article'. It could be that you have a great idea that's only 80% of the way there but it's waiting for something else before you can really get started. (Steven Johnson covers this in his book Where Good Ideas Come From.)

That might normally be a good excuse to not start writing it or to just shrug and say 'oh well!'. Don't do that, you schmuck! Write it down!

Do this however works best for you. A notepad in your pocket, an email to yourself, a post-it... it doesn't matter. But whatever you do, make sure you process that note somehow and keep it somewhere you can actually find it again. Want a good method for taking and processing notes? This book is gold dust.

I keep all of my notes for future article ideas on a specific page in my Roam Research database. Some stuff stays in there for ages and never sees the light of day, some stuff gets written immediately and other things stew a while before they get worked over.

The internet has a surfeit of serious and a want of wit. For the love of God, don't be so uptight.

Every website seems to be stuffed to the gunnels with ultra-serious LinkedIn bros who wouldn't know a joke if its mickey-mouse-begloved hand reached out of their protein shake and gripped them by their enormous necks. It's phenomenally boring.

If you'd like to go a little deeper on this point, William Zinsser has some excellent advice in his book On Writing Well.

If you don't have somewhere to show your work, why are you even bothering? Unless you are a master of the art and are happy to wait patiently - past the point of your own miserable death - for an intrepid literary archeologist to discover your magnum opus in a shoebox years down the line (they won't), you need to be showing your work somewhere.

Show it! Somewhere! Anywhere! Here's why.

1. Writing Is for Reading

If a tree falls in a forest... yadda yadda. Knowing that your writing even stands a chance of being read by a stranger focuses your mind and makes you write for someone. There's nothing wrong with writing for yourself, but if you are hoping to grow as a writer you need to be able to write in such a way that people will actually want to read it. Writing with publishing in mind gives you a sense of purpose as a result, even if it isn't laser sharp to begin with.

Putting your work out into the world is scary... at first. But after a while it becomes just another thing you just do. I put a post up every Thursday come hell or high water. 'Oop, better publish today,' I mutter to myself over coffee on Thursday mornings, and off I toddle to smash the 'create post' button with caffeinated vigour.

In the beginning, I would be wracked with worry and constant second guessing. Now I couldn't care less about the act itself - I just do it, mechanically, without a second thought. I plow all those spare worry calories back into making my writing better instead.

Whether your post goes viral or you just hear crickets, you're getting feedback. This is something that gets better with time, but you begin to get a sense for what resonates with people and what they have more interest in reading. You can start to see patterns and trends, and you may even be lucky enough to identify a correlation between the articles you most enjoyed writing and the ones that people most enjoy reading.

Are you reading badder? Or gooder? It's important to always be reading gooder. If all you read is trashy fiction or popcorn posts on your social media feed, what do you think is going to spring from your fingers when you sit down to write?

Worse still, if you don't read anything at all, how are you going to develop a sense of what is good or tasteful? What is 'good' and 'tasteful' is a matter of opinion, of course, but you need to be able to form an opinion to have one.

Besides, if you don't read anything at all how on earth have you made it this far through the article? Go outside maybe. Feel the sun on your skin. I highly recommend it.

All this is to say that crap in = crap out. Everything becomes much, much harder when you don't read high quality writing. You don't have to give up on your light reading (I certainly don't - I'm a sucker for high fantasy epics where you can see the plot points coming a mile off), but you also need to stretch yourself at the same time.

One thing I recommend is looking for collections of essays by writers you admire. I've avoided them in the past because I didn't quite know what to do with them, but they're often some of the best writing out there, just in a more compressed format.

There will be days where you feel like a slug that just wants to jump into a pile of salt and be done with it. We all get these.

You might not be able to write as many words as you hoped to, so just... don't. This is not Speed - the bus will not explode if you drop below 1000 words. Keanu won't mind, he's Keanu.

Beating yourself up about not hitting some arbitrary number is just going to make you feel terrible and associate writing with guilt. That's no good.

What is good is to never have a zero day. That is, never have a day where you don't write anything at all. Always have something written down by the end of the day. If you find yourself slug-like and considering a dose of sodium chloride, there's a trick you can play on yourself.

That’s all. Just one sentence. After you've written your one sentence you may find that you want to write another one after it. If so, write that down as well. See how that goes for a while, then maybe put the salt shaker away.

If you've been reading clammy handfuls of articles similar to this because you're having a hard time writing, I implore you to make sure that this is the last one. Just reading about something is not the same as doing the damn thing. And you need to be doing the damn thing if you stand a chance of getting better at it, or having any amount of success.

So shut the tab. Close every other window. Turn your phone off. Close the door. Then:

Building a Creativity Kanban
Is It Too Late? No. Start Now.
Stop Worrying About Productivity (And Do This Instead)
The Lightbulb Obsession
The Tyranny of the Popcorn Post

If you found that interesting, why not sign up to my mailing list? You'll join several hundred others receiving interesting updates about curious things that you won't see here on my blog. The emails are infrequent, it's easy to unsubscribe and I don't have anything to sell you. Neat.